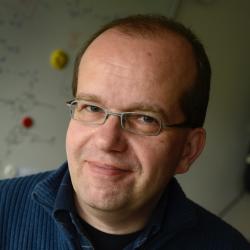 Stefan Luding studied physics at Bayreuth, Germany (with Diploma on reactions on complex and fractal geometries). He did his PhD on the simulations of dry granular materials in the group of Prof. A. Blumen in Freiburg, Germany and spent his post-doctorate time in Paris IV, Jussieu, with E. Clement and J. Duran, before he joined the Computational Physics group in Stuttgart, Germany, with Prof. Herrmann in 1995, where he achieved his habilitation in 1998.

In 2001, he moved to the TU Delft, Netherlands, as Assoc. Prof. Particle Technology. Since 2007 he chairs the group Multiscale Mechanics (MSM) in the Department of Thermal and Fluids Engineering at the Faculty of Engineering Technology and MESA+ at the University of Twente, Netherlands.

His major research expertise is on granular matter, non-Newtonian flow rheology, non-linear solids, particle interactions, cohesive powders, asphalt, composites, bio-/micro-fluid systems, self-healing materials and most of all on micro-macro transition methods.Among other tasks and services for the community, he is since 1998 Managing Editor of the journal Granular Matter as well as, since 2005, president of AEMMG organizing the Powders and Grains conference series with the next event taking place in Buenos Aires, Argentinia, July, 2021.